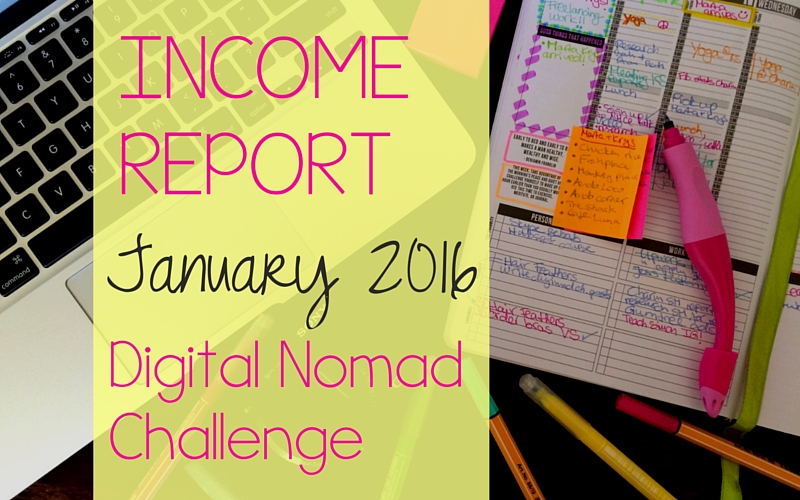 That’s true, can’t argue with that. Remember all those New Year’s resolutions I set myself? Well, I’ve been busy sticking to them, that’s why I haven’t posted in a while.

I’ve neglected exactly every single one of them, including the most important one: to blog more regularly.

Oh well. Now it’s spring. It feels like this is a better time to start over fresh, so let’s just do that.

Just a reminder for those of you who’ve already forgotten about all this crazy nonsense. In July 2015 I started my journey as a digital nomad and decided to try out ALL the digital nomad jobs out there. Ok, maybe not all of them, but all the popular ones that can be carried out by non-techies like myself.

And to keep myself accountable (yeah, that worked out well) I was going to keep track of my progress and publish regular income reports.

As this is a new year (right?) I also decided to revamp my infographic design a bit, I hope you like it (if not, who even asked you?).

So here we go, my Digital Nomad Income Report for January 2016.

Say what? A brand new job on the number one spot? That’s right! In January 2016 I started a (somewhat bumpy, but more about that another day) career as a social media manager. A friend I met in Chiang Mai and a friend of hers started their very own digital marketing company. They we’re looking for someone to help them out with tweeting, facebooking, pinning and ‘gramming, and they picked me! Yay!

Looking after 4 channels for 2 big companies was a pretty daunting (and exciting) job, and I set January aside to get the hang of it, instead of looking for new clients. It was quite risky and I’ll tell you more about it in next month’s report. It took a bit but of time in the end it worked relatively smoothly. And so, Social Media Management was my most lucrative job of the month.

Hours it took me to: approximately 50? 60? I definitely got faster at it but is sure took a while.

In January I was very lucky to continue working with my awesome client Deb in New Zealand. What stared out as some contract WordPress work turned into a bit of a Virtual Assistant role in that I am doing a bit of research, writing and WordPress work for her, and learning lots along the way. It’s not my most lucrative job, but I really enjoy it and am excited to see where it’ll go next.

Number of websites worked on: 3

This is the job I started in November, for a great blogger. I really enjoy the work, however, as a lot of it is very technical (it’s all about WordPress or marketing) it can be a bit too advanced for me. That’s why I only wrote one article in January.

It was fun as always, and the pay is very good too.

So, just like in December I made just over $1000. But in my defense, I actually took some time off at the beginning of the month to go to Hong Kong and Disneyland. It was also the first month in which we started moving around while working, before that we were either in Chiang Mai or on Koh Phangan, and I found it quite challenging to stay productive while travelling. We spent January in Hong Kong (a couple days), Hanoi and Hoi An in Vietnam.

So how much did I spend that much and did I cover my costs?

Hong Kong and hopping around made this month quite a bit more expensive than the previous months in Thailand. We also went on a wonderful Halong Bay cruise with one of my best friends who we met up with in Hanoi, so it all adds up. In total I spent $1151 which means I covered exactly 90% of my costs in January. Definitely not perfect, but I am still at the beginning and we moved a lot, so I’m happy with it.

Are you also building up a digital nomad income? How is it going?